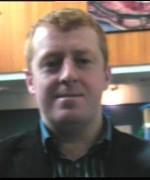 Tudur Hallam is Professor of Welsh at Swansea University. He is an award-winning poet, a Fulbright fellow and a board member for the Arts Council of Wales. He is Chair of the Association for the Study of Welsh Literature and Language and a member of the Executive for the Centre for Doctoral Training in Celtic Studies, funded by the Arts and Humanities Research Council.

He joined the Department of Welsh in 1999. He was appointed Chair of Welsh in 2011. His research interests are numerous, partly as he began his career in Swansea teaching sociolinguistics and translation, though he now teaches literature and creative writing.

He was born and raised in Penybanc, a village on the outskirts of Ammanford, or in Welsh, Rhydaman. This experience of growing up between two languages is central to his work. He once remarked in a poem:

(It’s a fact that there’s a town called Ammanford, an interesting place, for sure, and yet I know that I was raised in Rhydaman. I’m from Rhydaman. I was born in Rhydaman, and I don’t translate.)

The Welsh language and its promotion motivates him and shapes his work. He has family in Y Felinheli and in Tredegar and the notion of Wales as one nation, open to all, is very important to him.

In 2016-2017, having been awarded a Fulbright fellowship, he worked as a visiting research professor at the University of Houston, USA. Comparing the cultural make-up of Wales and that of other cultures is evident in much of his work.

After periods in Aberystwyth, Swansea and more recently Houston, he lives with his family in Foelgastell, Carmarthenshire. In his local community, he is a school governor and a youth football coach.

During the twenty years he has been at Swansea, Professor Hallam has created and taught a wide variety of modules in the fields of translation, practical bilingualism, the history of Wales and its language, literature, drama and creative writing.

In 2018, his pedagogical course book for undergraduates, Llawlyfr Meistroli’r Gymraeg, was published by the Coleg Cymraeg Cenedlaethol:

He is part of an energetic teaching staff at the department and in 2020, the National Student Survey put Swansea at the top for student satisfaction in Welsh Studies.

He also enjoys presenting lectures on Wales and its culture internationally, including opportunities to do so at the universities of Houston and Harvard in 2016-17.

Professor Hallam was awarded his PhD in 2005, under the supervision of Professors John Rowlands (Aberystwyth) and Dafydd Johnston (Swansea). He developed the research and published his first monograph in 2007, Canon Ein

Llên. He published his second in 2013, Saunders y Dramodydd and in 2019, his first collection of poetry, Parcio. He mostly publishes in Welsh, but is keen to present aspects of Welsh culture in English, e.g. the Chatterton Lecture on Poetry for the British Academy in 2014: https://www.thebritishacademy.ac.uk/documents/1610/09_Hallam_1817.pdf.

In 2016-2017, the Fulbright fellowship allowed him and his family to live and work in Houston, UDA, where he began to compare aspects of Welsh literature and Latino literature. Many of the poems in Parcio present his analysis and insights.

He has surpervised and assessed a number of research essays in the fields of creative writing (poetry, drama, prose), literary theory and criticism, post-colonialism, translation, and travel literature.

Chair for Poetry at the National Eisteddfod 2010