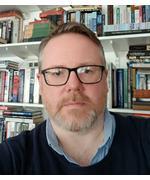 He delivers teaching in topics as diverse as Frontier mythology in 20th century American history, culture, the Spanish Civil War, total war in the modern era, international perspectives on propaganda film, American masculinities, the ‘American Way of War’, terrorism and culture, representations of war in art, literature and film and he contributes to a number of undergraduate and postgraduate programmes in the School of Social Sciences and the School of Culture and Communication.

Professor McVeigh is the series editor of War, Culture and Society, a research monograph series published by Bloomsbury. He is also a member of the editorial board of the Journal of War and Culture Studies.