A public debate competition at the Gwyddonle

Swansea University sponsors and hosts activities at GwyddonLe, the Science Pavilion of the Urdd National Eisteddfod. As part of the GwyddonLe activities, the Morgan Institute Challenge public debate competition was held once again this year. The competition is sponsored by the Swansea University’s Morgan Institute of Advanced Studies, which focuses on transformative interdisciplinary research. The aim of the competition is to give pupils the opportunity to demonstrate their reasoning and debating skills as well as receiving feedback from leading critics in the field of policy and politics.

After holding the competition on-line last year, it was great to be back on the Urdd Eisteddfod field and experience the buzz and excitement of the event in person. To coincide with the GwyddonLe theme for 2022, 'Health', the subject of the debate was 'It should be compulsory for people to be vaccinated against serious infections for the benefit of society'.

The standard of the competition was truly exceptional, and all competitors presented their arguments confidently and extremely eloquently. It was a very difficult task for the judges, politician Llŷr Gruffydd MS and Professor Angharad Puw Davies from Swansea University's School of Medicine. But the judges' decision was that the best speaker against the statement was Rebecca Rees from Ysgol Bro Teifi and the best speaker in favour was Hanna Morgans, also from Ysgol Bro Teifi. Hanna was also awarded the Best Speaker of the competition and therefore she was the winner of the Morgan Institute Challenge Trophy 2022. Both have won a financial prize of £500 for their school and Hanna will also have the opportunity to complete work experience of her choice, organized by Academi Hywel Teifi.

Llŷr Gruffydd MS said, "It was a pleasure to judge this competition at the Urdd Eisteddfod. We heard very polished and confident speakers and it was a very close competition." 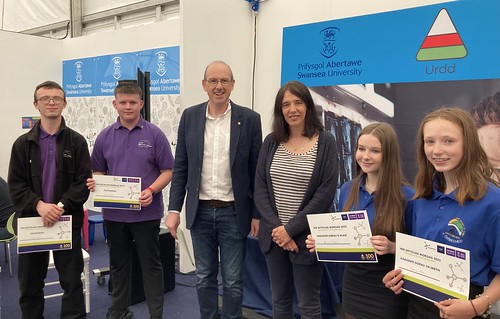